If you can drag yourself away from Tulum’s palm fringed beaches, I highly recommend that you make your way to one or more of the many nearby cenotes for a day of underwater fun and exploration.

For those who don’t know what cenotes are (I was one such person before this trip), they are natural sink holes, formed when a limestone cave collapses, to reveal an underground pool.

Some cenotes are completely open, like a lagoon, or entirely covered with a small opening at the top, while others fit somewhere in between. The water, which is either fresh or salt is incredibly clear, making cenotes the perfect environment for snorkelling and diving. 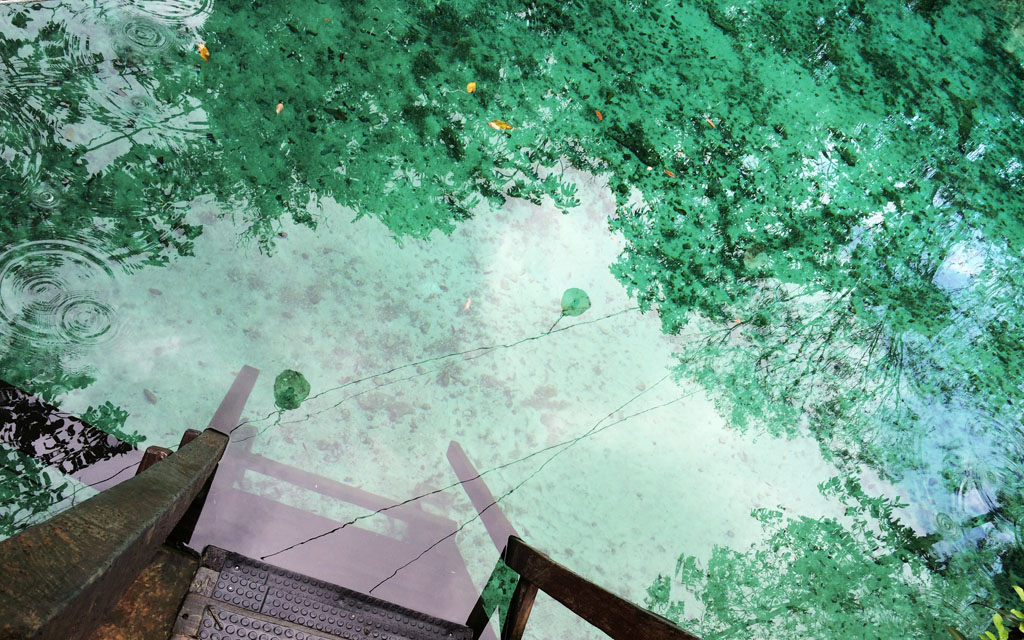 Swimming within the beautiful and mysterious underwater world of these natural pools was one of the most thrilling and wondrous experiences Nick and I had while travelling throughout the Yucatán Peninsular.

There are thousands of cenotes in the Yucatán and some are as close as 15 minutes down the road from Tulum’s centre. So there really is no excuse not to go.

Cenote Dos Ojos, meaning “two eyes” in Spanish, is the world’s third largest underwater cave system, and a must see and swim for snorkelers and divers wanting to explore this unique and fascinating underwater world.

The name Dos Ojos refers to the two adjoining cenotes connected by a large cavern, which are said to resemble a pair of eyes. I highly recommend that you visit both cenotes, as they each offer a unique subterranean landscape.

I was absolutely blown away by the beauty and tranquility of Dos Ojos, both above and below the surface of the water. Giant rock shelters shrouded by thick jungle, stunning stalactite formations, and beneath the water a mysterious world of limestone structures, hidden tunnels, and the blackness of the unknown.

Although I had been snorkelling many times before, floating through the water at Dos Ojos, was like nothing I had ever experienced. The sensation that occurred was that of resting on water. As I peered through my goggles, at my surrounds it felt as if time suddenly stood still. Motionless, I silently viewed colonies of tiny fish drifting ever so slowly with the gentle flow of the current. An incredible and a truly unforgettable experience!

If you’re more of an intrepid adventurer and hold an open water diving certificate, there is also the option to scuba dive. Diving promises the opportunity to see much more as the cenotes are connected by an underground tunnel system, which you can follow from one cenote to another. 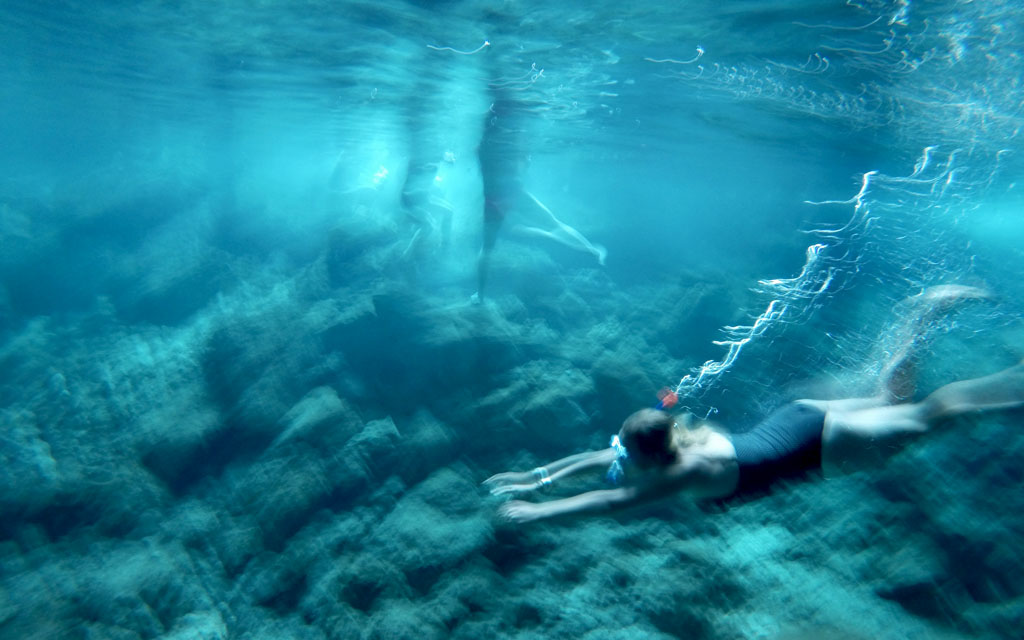 Located just off the highway on the way to Cobá, this partially sheltered cenote was by far the busiest sink hole Nick and I visited. While the beauty of Gran (Grand) Cenote and its surrounding area can not be denied, I must admit that the boisterous crowds did distract a little from the usually tranquil setting.

All was forgiven and forgotten though, as soon as we immersed ourselves in the cool, clear waters of the cenote. An absolute welcomed relief from the sweltering 34 degree (Celsius) heat we were experiencing that day.

Similar to other cenotes, Gran Cenote offers fantastic snorkelling and diving, as well as an impressive collection of stalagmites and stalactites, some that are tens of thousands of years old. Nick and had a great time floating through and exploring the large cavernous chambers, from one opening to another.

While the stepped entrances into the cenote are lit by streams of sunlight, the further into the caves you go, the darker and more eerie they become. In some sections, our swim was tremendously creepy, thanks to a lack of natural light, the water’s changing temperatures, and a flock of noisy bats hanging (and swooping) overhead. 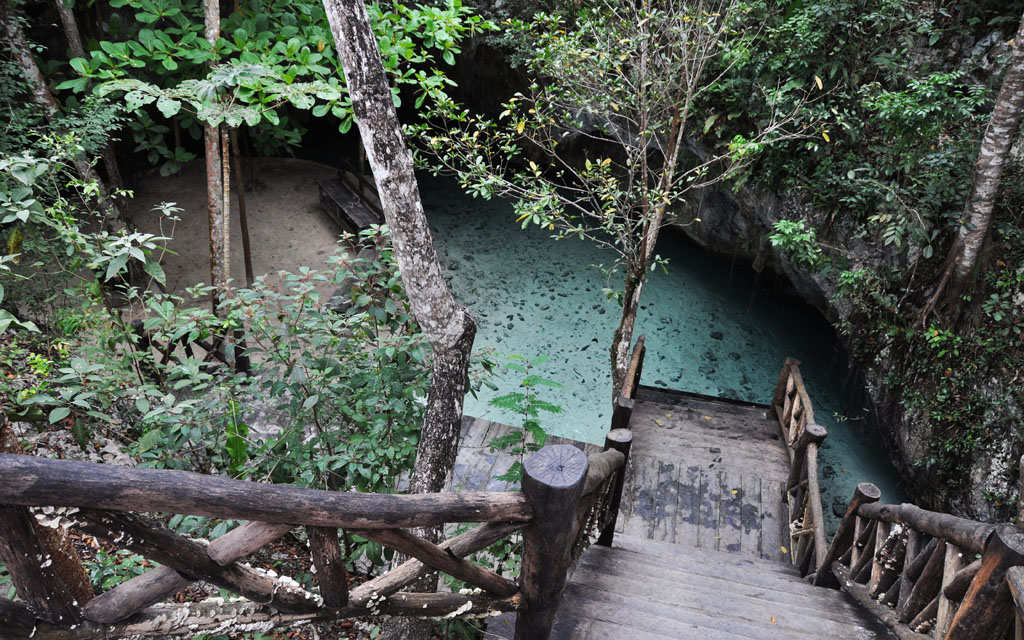 Unlike the other cenotes, mentioned above, Zacil-Ha (meaning ‘clear water’) is small and completely open. It is also less crowded and less ‘showy’. Pulling into the car park it actually felt as if the place had been totally abandoned. There wasn’t even a person at the ticket desk.

While admittedly the lack of staff was not a great sign, Nick and I decided to continue down the jungle path. And boy am I glad we did, as we were greeted by a spectacular wide opening and within it an incredibly inviting, turquoise coloured pool.

Naturally, Nick and I were quick to get in. And with almost no crowd we only shared the cenote with a family of five, who were thoroughly enjoying themselves summersaulting and back flipping off the jumping platform into the crystal clear water below.

I still can’t get over how beautiful Zacil-Ha was. We stayed for about half an hour or so, although we could have easily stayed longer had it not been for the sudden burst of torrential rain.

In addition to the cenote, Zacil-Ha has changing rooms, outdoor showers, a small canteen, rental equipment, sun beds, cabanas, and plenty of shade from the surrounding trees. So you can really make a day of it.

Now, as for the missing staff, they were there. They just all happened to be huddled under a cabana eating lunch when we arrived. 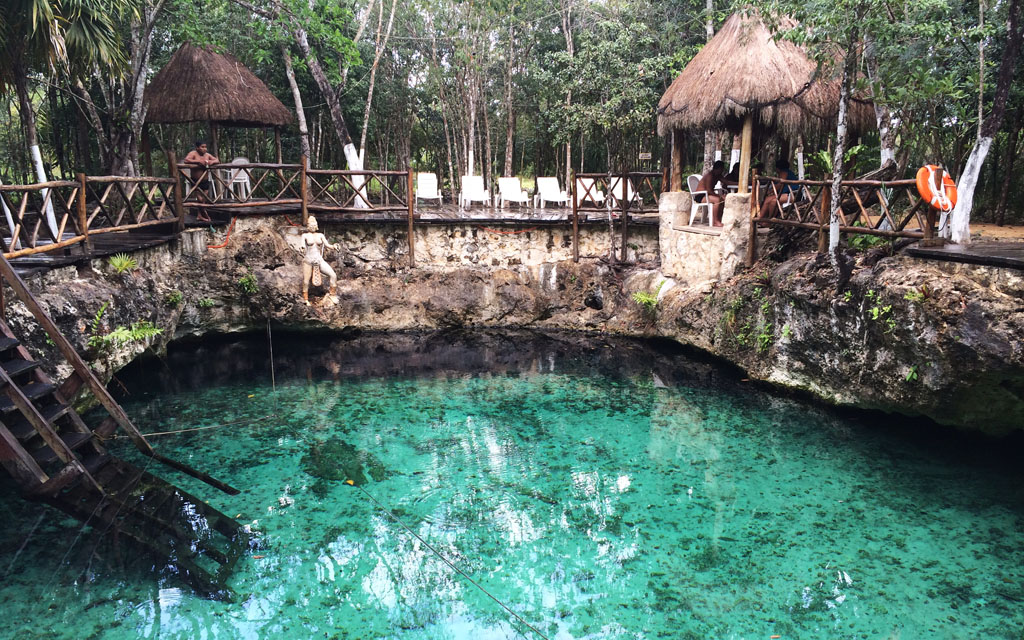 If you end up snorkelling and don’t have the gear, hire beforehand at either the hotel you’re staying at or a local dive shop. That way you don’t have to keep paying for equipment at every new spot.

Getting There: From Tulum you can take a collectivo (mini bus) for M$25 ($2 USD) heading north and get dropped at the entrance.

Getting There: A taxi from downtown Tulum costs around M$60 ($5 USD).

Getting There: Located 2 km's west of Gran Cenote, sits Zacil-Ha. So please check the getting there info for Gran Cenote.