Situated on the Arctic Circle, in the midst of a stunning and rugged wilderness, Rovaniemi, Lapland’s capital city is a compact and welcoming small town. As such it has become a popular short-term stop over on the Finnish traveller trail.

Blanketed in snow for six months of the year, Rovaniemi boasts a variety of winter activities, food delicacies, handmade crafts, Lappish art, Christmas decorations, and oddly enough the most northerly McDonald’s in the world.

Yet Rovaniemi is more famous for being the ‘official’ home of Santa Claus, who resides in the Santa Claus Village, which is located eight kilometres north of the city centre.

Indeed visitors from all over the world travel to Rovaniemi solely for their chance to meet the big bellied man.

Although bordering on tacky, tourists in their busloads descend upon the Christmas inspired theme park come winter, where an entire village has been built to house Santa’s office, toyshop, craft store and post office.

Ever wondered how the Finn’s get through their long, dark, bitterly cold and unforgiving winters? The answer my friends, is to take a sauna – many of them! I learnt this while travelling through Finland a winter or two ago. It was slightly more awkward than I had anticipated but nevertheless it did the trick. Here’s how my experience played out.

Nick and I had spent the day outside in -1°C temperatures, freezing our noses and numbing our toes gallivanting around Santa Claus Territory – some call it Lapland – in Northern Finland. As such we were seriously looking forward to partaking in a relaxing sauna back at our Rovaniemi Hotel. 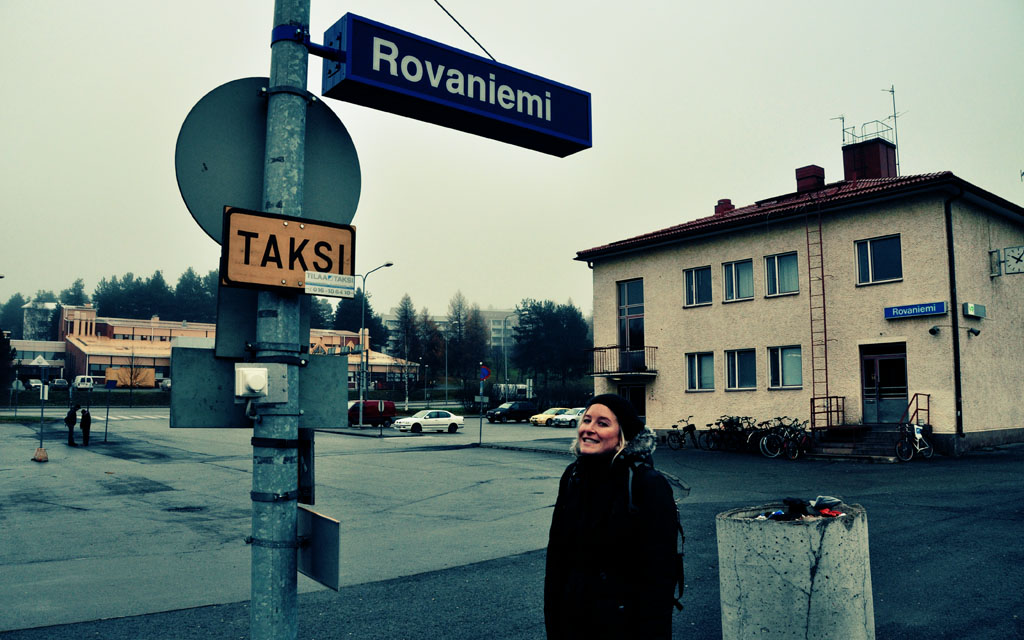 As Nick and I entered our separate saunas (male / female) I realised that I’d never actually had a nude sauna before and while nudism was no big deal to the locals here in Finland I started to have palpitations at the mere thought of being naked in the company of complete strangers. Luckily for me, there was no one else in the room. Phew! Call me prudish but after much consideration I chose to keep my bathers on, leaving the option to get naked and fancy free in public for another day.

Before stepping foot in the sauna it is customary to have a quick rinse, so I made my way over to the showers. Every step felt like an eternity. Then as I opened the door of the sauna, three things immediately struck me: the first (rather obviously) was the heat, the second was the glass panel in the wall which granted a magnificent view of the city (a perk of having a sauna on the 6th floor), and the third was how incredibly dark it was.

Not accustomed to saunas I was not sure whether it was meant to be this dark or not. I certainly could not find a light switch anywhere. Confused and slightly worried – I mean what if someone came in and I was sitting there in the dark by myself, surely they would think I was weird or perverted – I got out of the sauna and rang down to reception. After explaining my situation, the girl on the desk reassured me that the lighting was indeed meant to be dim.

Still not totally convinced I headed back to the sauna. As I re–entered I was relieved to see another woman standing there and after I excused myself for my sauna ignorance, I told her of the mysterious lighting situation.

Thank goodness for the Finnish and their impeccable English! The woman followed me to the sauna and agreed that it was too dark but like me was not able to locate the light switch. Yet instead of getting all panicky like I did last time we simply laughed it off and together settled for the ‘dimly’ lit sauna.

To this day it is one of the most bizarre experiences I’ve ever had. Sitting in an almost pitch-black sauna with a completely nude Finnish woman across from me, sweating and conversing about how saunas have become part of daily life in Finland.

The woman who was in Rovaniemi on business went on to tell me that the Nordic lands’ obsession with saunas was so great that there was even an annual Sauna World Championships, where contestants tried to outlast others in temperatures of 110°C plus. That was until someone died at the event in 2010.

As the woman poured even more water onto the heated stones I started to feel a little woozy, a combination of the heat and her story I’m guessing. So I thought it best that I retire for the night and as I started to leave the most embarrassing part of the evening was yet to come when the woman turned to me and asked, “Is there a swimming pool?” – starring at my bathers. How could I explain this one? I couldn’t. Sheepishly I replied “Erm no”. As I closed the door behind me all I kept thinking was ‘when in Finland do as the Finns do’. That’ll teach me!

Getting There: To save on a nights accommodation, take the exceptionally comfortable ten-hour overnight train from Helsinki.

Getting There: Hourly buses depart from the Rovaniemi Railway Station. Use local bus network, bus number 8.